Note : This article handles a complex topic, thus the instructions might not be really clear and coherent, any help or contribution to this page is welcome.

Let's call gameplay events everything that isn't static. In most cases, background is static, lighting is static, objects are staticaly placed on the scene. Dynamically generated content is, for instance, spawning monsters, triggering an animation when entering an area, starting a specific lighting after some time, ... Anything that will happen or not depending on time, player action, variables, etc.

This page aims at showing you the easiest ways to trigger the easiest events, which can be a good start to spice up your mods.

The entities described below are separated into two categories: Collectors and Triggers. Actually, they both list entities that can be actived, and be part of a chain of events. The difference we make here is that Collector entities will most of the time be the initial trigger in the chain (an area, a timer, a lever, ...) whereas Trigger will be activated by a Collector and then take effect on something (an object, a variable).

A Collector is an entity that will start a chain of events, for example when the player enters an area, or basically when anything happens. When activated, a collector will send a signal to designated triggers (or even other activate other collector).

Activated by: When the player enters a specific area.

Change the Dimensions of the BoxAreaComponent in the panel "Properties" to suit your needs.

The only other property component you should care about for a basic use of this is the TriggerOtherInstancesComponent. It is detailed in the TriggerMultipleOthersEntity section below.

Same as PlayerBoxCollectorArea but will be activated when an AI enters the area.

To propagate the event to a trigger, set the TriggerOtherInstancesComponent accordingly. It is detailed in the TriggerMultipleOthersEntity section below.

Activated by: another Collector / Trigger. 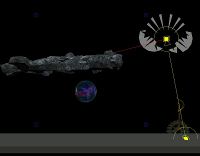 A lever triggering a wall break

Can be found under the TriggerEntity tree. Will break breakable things. For instance walls that are usually broken with the warrior's hammer.

Note : if you don't want the player to be able to mash the item but want only the trigger to do it, check the Immortal property of the TrineHealthComponent of the breakable object.

Can be found under the TriggerEntity tree. Will delete any instance without any animation.

Can be found under the TriggerEntity tree. When activated, sets a boolean variable.

Can be found under the TriggerEntity tree. When activated, sets a float variable.

Can be found under the TriggerEntity tree. When activated, sets a int variable.

Can be found under the TriggerEntity tree. When activated, sets a three dimensional variable.

Will call a Lua Script.

Listening on an event / variable

Now that you have a trigger that changes values on a variable, you'd like to have your objects listen to it. Bascially any property can be linked to any trigger output variable, as long as they are of the same type (see Variable Types. This coul be useful to:

Now, the following example includes a PlayerBoxCollectorArea, that triggers a TriggerToRotationEntity, that has two possible values ((0,0,0) and (0,0,90°)). We will now connect the Rotation output to an object's Rotation property (that can be found in its TransformComponent component in the properties panel). What you should do is:

You should now see a PropertyConnectionComponent appear, and, provided the BoxCollecterArea and the trigger are properly configured, an object that spins when you enter the area. This procedure is the same for any property of any object.